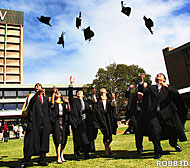 By: The Associated Press

WASHINGTON (AP) — Banks and other private lenders are about to lose a $70 billion-a-year student loan business, part of a massive overhaul of college assistance programs that has received an unexpected boost from President Barack Obama's health care success.

Industry lobbyists have watched helplessly as Democrats and the Obama administration appear on the verge of shifting student lending from private banks to the federal government.

Under the measure, private banks would no longer get fees from the government for acting as middlemen in loans to low- and middle-income students. With those savings, the government would increase Pell Grants to needy students and make it easier for workers burdened by student loans to pay them back.

The bill would mean the loss of billions of dollars in business to student lending giant Sallie Mae as well as large financial institutions such as Citigroup, JPMorgan Chase and Bank of America.

In an unusual twist, the fate of the student loan overhaul went from certain death in the Senate to certain victory thanks to Republican Scott Brown's election in January in the race for the seat of the late Sen. Edward Kennedy.

Until then, the legislation was not moving in the Senate because it lacked 60 votes to overcome a filibuster. But after Brown's election, Democrats decided that their health care initiative could pass only if Congress approved a companion bill that resolved differences between the House and Senate. That expedited measure requires only a simple majority vote.

The companion bill became a home to the student lending proposal and gave it a new lease on life.

The Senate began debating that bill Tuesday and is set to vote on it later this week.

But on Wednesday, only two of them — Ben Nelson and Lincoln — indicated they planned to vote against the Senate "fix it" bill. Nelson's home state is headquarters for Nelnet, another major lender and a big employer in the state.

"I think there are efficiencies in the private sector that you don't have in the government, but it's not going to affect my vote on reconciliation," Webb said.

Private lenders have conducted an all-out lobbying effort against the bill, arguing it would cost thousands of jobs and unnecessarily put the program in the hands of the government.

"The industry plays a role in maintaining competition and choice," said Scott Talbott, the chief lobbyist for the Financial Services Roundtable, an industry group. "If the government is the only lender, there is no choice."

Under the college lending program, financial institutions provide college loans at low interest rates, and the government guarantees the loans in the event of default and subsidizes private lenders when necessary to keep rates low.

"This is a case of corporate welfare, a giveaway to bankers and to Sallie Mae," said Sen. Tom Harkin, D-Iowa.

Republicans portray the direct lending plan as part of a pattern of government takeovers. Citing the health care bill and the government's bailout of the financial and automobile industries, Sen. Judd Gregg, R-N.H., said the student loan bill "is the fourth major step forward in the push to drive this country down a road towards a European-style government."

The bill would see $61 billion in savings over 10 years from the switch to direct government lending. It would pay for Pell Grants and provide more than $4 billion to community colleges and historically black colleges. It also would direct about $19 billion to reducing the deficit and offsetting expenses in the health care legislation.

In addition, beginning in 2014, college graduates would be allowed to devote no more than 10% of their monthly income to repay their student loans. The current cap is 15%.

Still, the legislation is not as generous as the bill the House passed last year.

It proposes no increases in Pell Grants over the next two years and a modest increase over the five years that follow. The maximum Pell Grant, which a House-passed bill last year would have raised to $6,900 over 10 years, will now only increase to $5,900. The current maximum grant for the coming school year is $5,500.

Carper said he worked with for-profit and nonprofit lenders to find a way for them to continue to be involved servicing and originating loans.

"Our challenge was to come up with an approach where we could generate the kind of budget savings that were generated by the president's proposal," he said. "We simply could not get there."

Copyright 2010 The Associated Press. All rights reserved. This material may not be published, broadcast, rewritten or redistributed.